FundaSitio‘s General Manager, Douglimar Rojas attended to the show RED 20/20 on Humano Derecho Radio Station, where she spoke about the role FundaSitio plays on modern society, emphasising on how important it is to help nonprofit organizations grow organically (a very important aspect on the digital era we are currently living).

According to Rojas, FundaSitio’s main goal is to create direct links to the digital inclusion through the connection between organizations and foundations that wish to promote social initiatives that, sadly, do not have the sufficient resources to create a digital platform that could represent them and that may work as a multiplier agent.

“Our principal mission is to donate websites to non-profit organizations and to create functional tools that will help to encourage all those social initiatives that contribute to society’s welfare” – adding – “We link, we help, we refer and that’s the idea… Helping to grow!”

How? As well as donating websites, we counsel digitally and we educate organizations, so they are capable of webmastering their own platforms:

“Each website is designed according to the organization’s needs, there aren’t two websites alike, because not all of the organizations are alike. We offer not only communicative solutions, but also help and accompaniment to achieve the final goal that translate into the graphic design of the site” – Douglimar Rojas added. FundaSitio, an initiative that started out as a CSR

Douglimar Rojas took the chance given by RED 20/20 to tell a little bit of FundaSitio’s story:

“This organization started out as a Corporate Social Responsibility (CSR) by an entrepreneur, Rafael Núñez Aponte, through his company MásQueDigital” explaining that, at the beginning, the now-foundation was managed from the company’s offices.

“Later, Rafael Núñez had a vision that went more to the direction the foundation has nowadays. We went from being part of MásQueDigital to become an independent company with our own office, highlighting that this company has an incredible team of communication experts, designers and web developers”.

The incredible value of that human talent, according to Douglimar, is taking FundaSitio to even go beyond the job of donating websites:

“We also are involved with other projects, such as Construye Una Sociedad Digital (Build a Digital Society), that as well as donating websites, it promotes the engagement between commercial organizations that wish to create their CSR projects through FundaSitio”.

The reason? Because the organization is betting on digital inclusion! “This digital platform tendency is vital to keep on multiplying what we do though the foundations we collaborate with” – Douglimar Rojas added on the interview – “The motivation comes from within ourselves. If we do our jobs with faith, positivism, and good vibes on all the goals we set our hearts for, we will reach our dreams”. 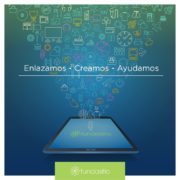 FundaSitio Works For A Better Country