The Technology Manager of MásQueDigital, Alexis Rodriguez, explained that cryptocurrency cannot be regulated by any government “because they do not operate from any central bank”

“No government can regulate the cryptocurrency because it is a system validated by thousands of ‘miners’ worldwide, it does not count with the guarantee of a Central Bank. Each transaction goes through a process of validation through diverse machines worldwide (…) the transactions in Blockchain cannot be regulated, you will have to eliminate the whole internet” the specialist said so in a Radio Show called Ciberespacio, through Unión Radio, he also said that government can regulate the exchange offices that operate with cryptocurrency.

The problems of mining Bitcoins in Venezuela

The mining Bitcoin issue in Venezuela can be a great problem due to the absolute lack of controls over the transactions.

“In Venezuela, the problem is that there is no regulation for this equipment (of mining)”. Those who have them have smuggled them into the country, or have built them from a computer with several graphic accelerators. Anyway, this equipment consumes great energy and they are going to say that you are wasting energy due to the Electric Emergency Decree (…)  The law of Cyber Crimes nor the Commerce Law have a technical specification for these kinds of transactions. Basically, I’m buying in Bolivars a software, once I bought it, I saved it and then if I see that its value increases I can sell it for its value in Bolivars according to the dollar price that day” he said.

For a part, explained Rodriguez, it is technically illegal to mine cryptocurrency, for he or she is getting rich outside of a legal framework (there is no regulation on the matter) and nobody is paying taxes; for the other part, it is basically an operation of purchase and sale of a software (a technology) which value goes up and downs according to a market.

Even though, nowadays the National Government does not dismiss the idea to evaluate the impact of the cryptocurrency in the financial system.

“We have to pay attention, because in this crisis we need an alternative to overcome the difficulties, to invest a certain amount of money in this currency. You can save Bitcoins and watch it grow” said Rodriguez.

Cryptocoins are here to stay 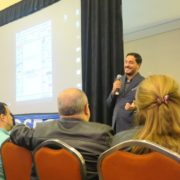 Rafael Núñez at the InfoSecurity Tour 2017

E-Commerce: a Growing Market in Venezuela!

Alexis Rodriguez: Bitcoin Is The Cryptocurrency of The Present

Rafael Nuñez: Spain Should Thoroughly Overhaul Social Networks After The A...
Scroll to top